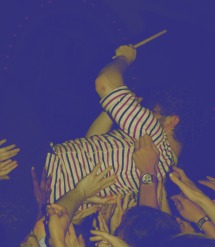 I have to admit. I was a bit skeptical of the so-called “bouncy” floor of Crystal Ballroom, but was more than convinced Wednesday night during Foals. I’m pretty critical when it comes to pleasing every sense but Foals did just that. From opening to encore, they  glided across they stage like they owned the place (rightfully so). It even excited me to see that they were at that level where the guitarist Jimmy Smith could toss his guitar easily on the stage easily, as it was immediately replaced with a brand new one. They played a mixture of the old – “Electric Bloom,” “Olympic Airways,” “Two Steps Twice” (all from Antidote)-  the not so old – “Blue Blood,” “Spanish Sahara” (Total Life Forever)- and all of the new ones from Holy Fire that matter (Stepson). Their beautiful performance and incredible energy will forever be engrained inside of me and everyone that attended the show on Wednesday.