“This is what I like to call ‘Audience Calibration.'”

If there were to be a underlying notion for Deerhunter and Atlas Sound‘s performance last week at Portland’s Wonder Ballroom, it would ultimately lie in the desire for transparency and trust. With the release of Fading Frontier, an album that could lead them aiming for the surreal transition of cult icons to overwhelming consumption, Bradford Cox and company have navigated themselves into the rarified territory of mass adoration. They’ve become the indie band capable of filling stadium seats. But this band doesn’t have the desire to be an elusive polished juggernaut, a fact apparent as soon as the venue’s doors opened that Monday night. 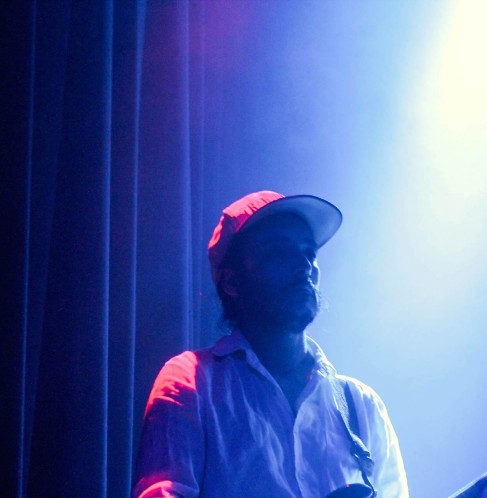 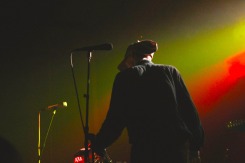 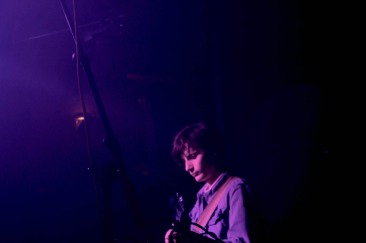 The crowd was not greeted with a dimly lit, absent stage but by the band itself, essentially giving a live rehearsal with audience participation. Bradford turned to the crowd to gauge if they preferred open picking or overdriven chords for the chorus of “Take Care,” unsatisfied until he made the crowd physically choose sides: “clean, open pickers get to the left, over drive aficionados take post to the right”. After hashing out vocal melodies for “Duplex Planet,” Bradford took to social engineering, picking audience members to befriend one another, imploring a group of women to start a kraut rock band (a genre which Bradford has some terse opinions of), and grabbing song requests from a man who made the long trip from San Antonio just to see the band. It was odd, occasionally awkward, and strangely illuminating. Instead of waiting for a band to emerge fully polished, we watched a band put itself together; effectively pulling back the veil of what goes into making them ready for consumption or the process necessary for retaining one’s art. It felt like a minor performance piece in itself.

That notion of watching creation in process was carried over for Atlas Sound. While Bradford has performed album material with a full band before, this was a purely solo endeavor. With merely electronics and a sequencer, the set was nigh formless, evoking dizzying industrial clatter and Björk style vocal melodies. The material seemed purely an evocation of Cox’s existential worry and psychic eccentricities. Loops deepened and evolved without any noticeable commitment to time, and lyrics were nearly buckshot and indiscernible. With the exception of Cox’s most steadfast motifs, the question of masculinity implied in “being a better man” and a navel gazing concern for impending death. If anything, it spoke to what is already known about Bradford. He copes with his deepest concerns and proclivities through music; his set being that ID trying to find a pedestal. With Atlas Sound’s set stretched to its oscillating and tenuous end, the members of Deerhunter filtered on to the stage, absorbing the noise around them before descending into “Cover Me Slowly/Agoraphobia.” What followed was a set that, at times felt brittle and at other turns grandiose.

If the pre-show was a glimpse into a band retaining its work, the show felt like the material was slowly getting away from them. This was for better or worse. Fading Frontier’s single “Breaker” felt flattened with unclear guitar work and, because of this, lacked that epiphanic glint that makes the song so great. Yet “Living My Life” showed some potential to become something all together different as the band indulged in its dub qualities and stretching its form out to a hazed vibe of repetition. It was during the pillared “Nothing Ever Happened” that Bradford’s guitar started to give up altogether.

For most bands, this would be wildly discouraging. For most crowds, a reaction of frustration would be understandable. But, as I have noticed with Portland’s all-ages crowd, they can be the life blood of any questionable experience. As Cox’s bandmates retained the song’s rhythm and  built upon the noise, the young crowd took to throwing each other around, intent on keeping morale high. Tiny spent bottles of smuggled Sutter Home Chardonnay could be seen rattling on the pit floor. I stumbled upon a plastic water bottle of vodka that sent a shiver of poor high school choices back to my mind. As the band slowly steered their song into a PDX natives The Wipers cover, they vacillated back and forth for well over the ten minute mark and momentum was retained. Despite Bradford’s admission that he thought the show wasn’t going very well, the crowd was unwilling to agree.

It was Bradford’s ambivalence in his own performance that brought the night’s most memorable moment. For a closer and Halcyon Digest standout “Desire Lines,” the band brought on a special guest: their friend Fox, who was years off from hitting puberty. Fox was set up on a synthesizer and instructed to play it to his heart’s content. While he started off shy, his eyes darting back and forth amidst a daunting sold out crowd, he began to lay into a staccato discordant melody. As the band diluted themselves into formless feedback, Fox simply kept going. I’m sure most kids would’ve turned tail and ran off stage at this point, but Fox looked absorbed. Ever solemn feeling I harbored at the anti-climactic nature of my favorite song faded into a very heartwarming and enchanting warmth. This kid, getting into the weird and wild world of experimentation, hacking away on a synth, was clearly into the sounds he was creating. The jam stretched on into the 20 minute mark and the band slowly left the stage, leaving just Bradford and young Fox. Fox wasn’t finished. Bradford only inspired encouragement. The sound became a tapestry of reverberation and noise until Fox walked off finally fulfilled, ignoring the crowd entirely.

When the show was over, it felt pivotal, even though it was far from what anyone could’ve expected. A couple of fuck-ups and a few happy accidents possibly paved a way for a new, budding musician. Maybe ten years from now, we’ll read a Pitchfork feature on Fox’s fond beginnings, joining Deerhunter for a sold out show. Or we won’t and we’ll simply be left with the memory of a band trusting us enough to dissect themselves before us.