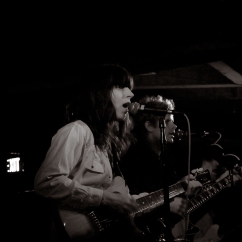 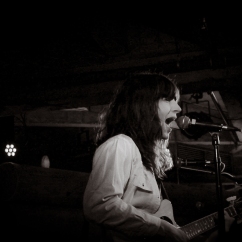 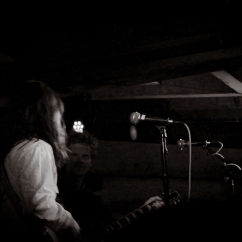 There is a certain notion that happiness is the least motivating emotion in the creation of art. Happiness doesn’t evoke the need to be reconciled much like suffering does; it cannot provoke catharsis. Happiness breeds stability and stability can sap the frenetic urge that can evoke stages in life that can be difficult to put into words. Fiery Furnaces, for all their high minded eccentricities and bold creative choices, managed to tap into that urge often. But can the music of placid satisfaction translate into similar grand moments? With Eleanor Friedberger‘s latest foray into the realm of borderline adult contemporary pop, it seems it’s not easy to empathize with such feelings.

Eleanor as a performer has always struck a presence on stage, a fact that still holds true. Decked in white denim, she creates an image that is gaunt yet commanding. Her vocal control, never showing a note of strain, can be transfixing. Friedberger has one of the most effortlessly iconic voices in modern music and it translates beautifully to a live environment. Her confidence in mid verse is only contrasted by her short bits of dialog in between songs. In those moments where she gives birthday well wishes to an audience member in the form of playing the most somber song of the evening, her humor can be a wry as her lyrics suggest.

Ultimately, it is the music that fails to illicit much of an emotional response. Friedberger’s latest New View is the epitome of middle road singer “slash” slice of life that can’t muster much beyond a crowd’s gentle sway. This is surely a biased view from someone who reveled in the caustic nature of Eleanor’s performances with Fiery Furnaces (and even the still prominent restlessness of previous solo outing Personal Record) but it amounts to feeling like lostless versions of songs rather than a performance. The truth is, New View is the sound of introspective life acceptance, the score to a road trip right before the second act of a coming of age indie cinema breakout. Coming from someone whose previous single was “I’ll Never Be Happy Again,” the change in outlook can be appreciated more than the material.

Still, the older cuts can evoke something beyond the general head nodding vibe. Last Summer’s opener “My Mistakes” is still flawless twee pop and live it elicits the humblest of dance parties as Eleanor adopts a minor chanteuse demeanor. That album’s “Roosevelt Island” may be Friedberger’s crowning achievement and it feels consuming as its steady churning narrative can swallow an entire audience within its dizzying milieu. At these moments, it seems that even Friedberger is most comfortable, evoking a more modern and soulful Patti Smith, equally awash in New York scenery and bygone romantic pastiche. The New View of Eleanor may be earnest but it doesn’t feel as authentic as the restless savant. Maybe that’s because it is the Eleanor I admire most: one slightly heartbroken yet never wavering in her coiled poeticism.