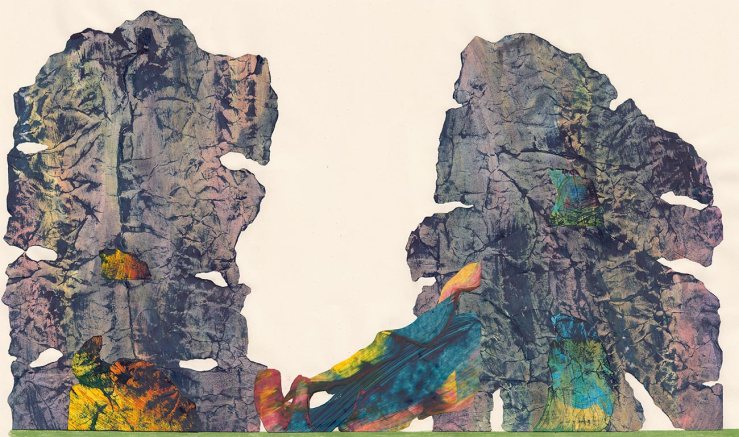 On Grizzly Bear’s last record, 2012’s Shields, the quartet ended things with the seven-minute excursion, ‘Sun in Your Eyes,’ a track that bids farewell. “So bright, so long. I’m never coming back,” they said.  It was an ominous yet definitive conclusion to the band’s sonically most daring and emotionally vulnerable addition to their catalog. Known previously for their refined tendencies and elegant attention to detail, Shields was a record that blew such cordial expectations out of the water. It took the quartet’s introspective and impressionistic approach to music to unprecedented vantage points, like admiring a raging storm both from a few miles away and from inside the chaos. It expanded both their sound and, inevitably, their following. Then, at the height of their powers, Grizzly Bear disappeared, leaving behind space in the “indie” rock world that they had carved out and mastered for themselves, only to return with Painted Ruins, their first release in nearly five years.

The orchestral trip hop of opener ‘Wasted Acres’ swaggers like a mirage before revealing its ornate underbelly. It’s something of an unexpected beginning. At its outset, you’ll question if you’re actually listening to a Grizzly album, or if Portishead has come out of retirement to soundtrack a 1940s film noir. Absent is the swirling instrumentation of Veckatimest’s ‘Southern Point’ and the abrasively lush guitar of Shields’s ‘Sleeping Ute.’ Yet the result is only what can be expected of the foursome: equal parts of everything at once, a myriad of layered dissonance that comes undone ever so slightly, resulting in new meaning to the adage, “appearances can be deceiving.”
Near the end of the track’s chorus, co-lead vocalist Daniel Rossen asks a brutally simple question: “Were you even listening?” Its bluntness is effective in implicating the listener, serving perhaps as a lyrical equivalent of getting the attention of someone who’s been checking their phone the whole time you’ve been explaining something. In a day and age when streaming music is second nature, when an excess of information is so readily available at our very fingertips, Grizzly Bear are something of an anomaly, not only because they’ve been away for five years, but rather because their music is the kind that requires repeated listenings and a certain concentration that has been lost for the sake of gaining musical omniscience by subscribing to a streaming service.

In a similar vein, the band and their catalog stand out as they sound almost like nothing and no one else in the contemporary music scene. Those who have attempted to categorize the sounds and sensibilities of the band have come up short at finding apt nomenclature. The band’s records are a swirling and pulsating mix of chamber music with equal affinities for jazz and folk, guided by harmonies reminiscent of The Beach Boys. Guitars rumble, percussion skitters off in various directions, flutes and saxophones have the tendency to come and go.

Painted Ruins, then, is a testament to the fact that they’ve not only retained the skills and enigmatic qualities that initially set them apart but that they have also become more deft and astute at their craft. The simmering instrumentation that begins ‘Four Cypresses’ is beautifully ominous like a lush encounter of a third kind. ‘Losing All Sense’ operates a jangling guitar riff over booming drums with results bordering on pop satisfaction. The gorgeously coarse push and pull of tension and solace on ‘Aquarian’ ends with a satisfyingly endearing guitar-heavy outro. The folk transition that occurs midway through ‘Cut-Out’ references their sparser sensibilities before cutting open into bursts of instrumental energy. As a band that has always shown a startling attention to detail, Painted Ruins finds Grizzly Bear expanding their sonic repertoire ever so slightly, thanks to producer and multi-instrumentalist band member Chris Taylor who has always expressed a knack for impeccable ornate combinations. Thematically, the record does not fall too far from the rest of the band’s catalog either. The songs that make up Painted Ruins are disjointed at their core, struggling with ideas of loneliness, longing, and alienation, concerns that seem more relevant than ever in a world that continually seems to be moving backwards at an accelerated rate.

But the question that so inevitably creeps into one’s mind is not easy to ignore: What is the place, purpose, and value of “indie” music, or just art in general in the world of today? Does it even matter when there are many other significant and pressing concerns at hand? Countless bands seem to be putting out an endless number of albums on any given week. Why does it matter that another band that used to be based in Brooklyn has put out a new record? Such questions are not unlike seeing your friends grow out of the music they’ve listened to now that they’re in long-term relationships and on steady career paths. The purpose, however, of another Grizzly Bear record is not to criticize such a shift in priorities. The band’s members have undergone their fair share of existential crises and life changes since the release of 2012’s Shields. All four band members respectively moved out of Brooklyn to start new chapters of their lives; Droste, Taylor, and Bear found themselves in Los Angeles while Rossen now resides in Santa Fe. In interviews, they’ve alluded to and explicitly stated that the neighborhoods they resided in during the band’s genesis had changed so immensely; the cost of living raised by gentrification to accommodate changing sensibilities with the value of art becoming reduced to social media spectacles and follower counts. But when their surroundings changed, the band did what they do best: they looked inside themselves, together and apart, taking the most time they ever have between releases, fiddling around with outlines and demos before collaboratively tackling the beast head on to create the most adventurous, self-sustained addition to their catalog yet.

After five long years, Grizzly Bear have reached the present with a triumphant record that still attempts to work through the anxieties of the modern condition and the inevitability of change. Their time away has allowed them to absorb their respective experiences to create a record that so eloquently reflects the inherent challenges of persisting in an ever-changing climate. As Rossen so succinctly croons on ‘Four Cypresses,’ “It’s chaos, but it works.”

A coffee drinking, food eating person. My mind is always at the movies. View all posts by slaprick